As a congregation, NDPC has been praying, raising attention about, and working to end gun violence. Many of you remember the hundreds of colorful ribbons that hung on a fence outside our sanctuary. Others of you have been decorating 3 inch by 3 inch paper “Soul Boxes” (http://ndpc.org/soulbox/) to be added to a massive art installation that honors gun violence victims–an installation we hope will be displayed at our state capitol. Most of you have been praying “Lord, have mercy” every 3rd Sunday of the month as we read the names of our neighbors in Georgia who died from gun violence in the previous month. We will say these prayers again this Sunday. 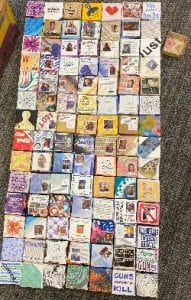 Gun violence is not something that we have any reasonable expectation of ending. You know the ubiquity of guns in America. Estimates put the number at over 400 million; more guns than human beings. You know human beings are prone to anger and violence. Data says that where guns are common, so are gun deaths. Why do we bother praying? The 2nd Amendment is not going away. There’s not the will or the money to buy back the firearms in circulation. And we’re never going to make people less violent… are we?

For me, our focus on ending gun violence is a spiritual discipline. It takes one of the great truths of Jesus’ message–peacemaking–and places it against one of the hardest realities of human existence. Can Jesus’ call for peace wear down and ultimately wear through the “intractable” reality of gun violence in America, like water, with time, cuts through rock? 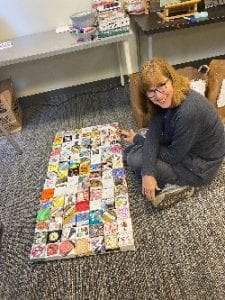 I’ve noticed several things as we have prayed all these years. One is that while mass shootings get the most attention, the majority of people for whom we pray each month are either young Black men or loved ones who die by suicide. This realization has moved me to see that “ending gun violence” is synonymous with ending social isolation, increasing access to mental healthcare, moving toward a restorative model of criminal justice, and ending systemic racial inequality. While these, too, are “big” issues to tackle, for each of them there are very specific things that people are doing right now in DeKalb County to change these realities. There really are very specific ways you are called to help end gun violence that have nothing to do with guns.

The most important part of this prayer practice is simply to weep with those who weep, name by name. You can’t weep over “gun violence.” You can weep when names are read. You can imagine a mother or father who gave their child that name and who dreamed great things for them and who wept when they were buried. You can imagine a son or daughter who says their parent’s name after it becomes clear to them that they are never coming back. Each name is of a beloved child of God. Feeling the loss of each both consecrates their life and troubles our spirits enough that we might yearn for a future in which such deaths no longer happen.

If you would like to participate in the Soul Box project, you can find out more information at http://ndpc.org/soulbox/.

Bless all of you who have worked, created, and prayed us toward a world without gun violence. 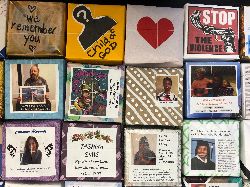 To understand how powerful the Soul boxes are, enjoy this note from a member of NDPC who has been making these boxes and ties it into her Sunday School class. Alice Hickcox submitted this note and photo of the Soul boxes she has been working on.

“Thank you for this class (Howard Thurman). It was deeply moving today, and combined with worship, doubly moving. I feel confirmed in my instinct that each of the Soul Boxes I created should claim the person as a beloved child of God. So Thurman tells us, and so I believe. Most of the people on these boxes are young black men. It makes me doubly sad. We have made hundreds of these boxes. It is a great burden and prayer. Thank you for your gift to us.”