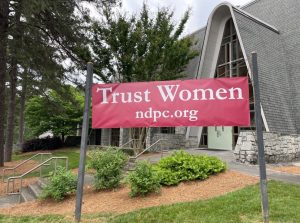 We can trust women to be reliable witnesses in our search to understand the resurrection and reproductive justice.

On Easter Sunday this year, we heard the resurrection account from Luke’s Gospel. Rev. Lewicki preached:

“Jesus is not here, but has risen. Remember how he told you, while he was still in Galilee, that the Son of Man must be handed over to sinners, and be crucified, and on the third day rise again…Now, it was Mary Magdalene, Joanna, Mary the mother of James, and the other women who shared their witness with the apostles. But their words were perceived by the apostles to be an idle tale, and they did not believe them.”

Followers of Jesus have a history of not trusting women – whether it be their testimony to the power of Jesus over death or their own account of what it takes to birth and sustain life in today’s world.

Through the resurrection, we say Jesus conquers death. His resurrection is a testimony that love is more powerful than death. It was because Jesus as God so loved the world, that he surrendered to death rather than demand others die for him. Through his death and his subsequent return to his followers, Jesus exposed the death-dealing culture of the Roman Empire, a culture that continues today when colonialism and capitalism define how we understand ourselves and others as human beings.

As Christians, we affirm with the letter to the Romans that “in life and death, we belong to God.” God is the ground of our being whether we live or die. We recognize that life is not a guarantee or requirement in our union with God. We cherish poetic accounts of life’s origins: when God breathes the nephesh into the soil and creates humankind in Genesis. We wonder along with the Psalmist if God knit together our innermost parts in the womb. We affirm that there is something special, sacred, about our lives as it is expressed in the midst of God’s beloved creation. We affirm the “sanctity of life” as our participation in the holy communion of the beautiful bounty God created and called good in the beginning. But we recognize that just when an individual life begins is not certain according to the Biblical witness, which is why people who follow various strains of Judaism, Christianity and Islam do not agree on this.

We do agree that God is not finished with us or creation yet. There is more redemption to be realized. The evidence of our brokenness is all around us in our violence towards one another and in our systems that oppress entire races, genders, and cultures. While we are alive, we are tasked with difficult choices and competing common goods brought on by an economic, legal and social system that was built on and sustains injustice.

It is into this reality that women are faced with bearing children. For many, especially black and brown women, the obstacles are too great and the risk to their health and families are and have been life-threatening for generations.

WHAT PRESBYTERIANS BELIEVE ABOUT ABORTION TODAY

Before Roe V. Wade was passed in 1973, clergy affiliated with NDPC were a part of a nationwide movement of clergy persons willing to counsel individuals and provide access to safe abortions. The death rates of women from illegal abortions were just too high for their Christian conscious to bear. The message that a woman’s life was of less value than a potential life reinforced systems of control that ran counter to the liberation of the gospel’s message as NDPC understood it.

In 1970, the Presbyterian Church of the United States (“the northern church”) voted as a national denomination to be pro-choice. In 1986, when the southern and northern churches reunited, that stance was maintained with some allowances for individual conscious in the payment of healthcare dues. The united church known as the Presbyterian Church (USA) has prayed and discerned over the moral dilemma of abortion as a reality and a right in this country for decades.

In 2018, the 223rd General Assembly (the Presbyterian congress) stated:

“Personally choosing not to have an abortion or use birth control… is religious freedom. Making that choice for someone else, on the basis of one’s own religious principles, is religious oppression.” 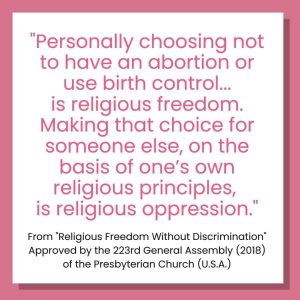 Abortion rights are a matter of religious freedom according to the 223rd General Assembly of the PC(USA) in 2018.It also commissioned a Task Force for the Experience of Black Women and Girls. Because of their report, the 2022 General Assembly is now considering a proposal to spend more denominational action and resources towards the full expression of reproductive justice as it relates to why women of certain races and classes have poor access to reliable birth control and affordable healthcare, poor prenatal care, and a host of economic obstacles for sustaining a family.

No woman takes the decision to abort lightly. This is affirmed when you stop to listen to the real stories—the lived experiences—of people with the power to birth rather than caricatures propagated by ideologues or the lifeless depictions leaked in legal opinions.

WHAT THE DATA REVEALS ABOUT THE REAL REASONS FOR ABORTION

The statistics reveal this:

And yet, since Roe v. Wade, the American public have been fed a different set of stories, stories that are untrue: Responsible women don’t have unplanned or unwanted pregnancies. Women who have abortions are sexually promiscuous. Women who get pregnant should have to live with the consequences of their behavior. If you don’t want to have a baby, you shouldn’t have sex. The adoption and foster-care system for children is an easy, uncomplicated option with access to plenty of loving homes.

Perhaps this is why even as abortions rates have gone down since legalizing abortion in 1973, the public opinion that abortion is morally wrong has increased to that of 50%. With that increase in public scrutiny, the state laws to limit access to abortion have increased in the last ten years. Between 2011-2016, 334 laws against abortion were passed, as opposed to 189 between 2001-2011. These laws effect women of color and women living in poverty the most. This has happened even though over 60% of Americans believe abortion should be legal in most cases.

Women’s choices affect more than their bodies and the body of a potential life. They encompass the health and well-being of their children, grandchildren and communities. A woman is thinking about all these things when considering if it is safe for her to continue a pregnancy.

Why then can’t we trust women as responsible, moral agents in a world that is irresponsible and amoral when it comes to the support it offers women and their communities?

In May 2022, the national Presbyterian Women and the Presbyterian Women chapter at NDPC sponsored a book club to read Trust Women: A Progressive Christian Argument for Reproductive Justice by Rev. Dr. Rebecca Todd Peters. Many of the statistics and arguments above come from this comprehensive look at Christian ethics and American policy. 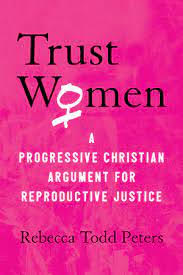 We invite you to read it too, and to approach our leadership as you discern your response to changes to state and federal laws regarding abortion, healthcare and welfare. We hope to offer a five-week ecumenical course in the fall to delve further into these topics as the legal atmosphere surely changes and actions to support safe reproductive choices will continue to be criminalized.

We also lift up your involvement with denominational groups active in the full scope of reproductive and economic justice.

Since 1971, when this congregation was involved in the Concerned Clergy Services, other activists with greater ties to the communities most affected by reproductive injustice have formed and expanded their advocacy and services in Georgia and the Southeast. If you are looking for a way to offer direct support now, please support the following or speak to a pastor about even more organizations and activists involved in the work of reproductive justice.